How do you design conservation finance projects for optimal impact, and how might funders and investors evaluate them across project types?

How do you measure success, both financially and in terms of on-the-ground conservation impact?

Our reporter spoke with the authors of a new Enduring Arches report for a distillation of their framework's evolution and applications.

When Sean Penrith, CEO of Gordian Knot Strategies, set out to apply for an NRCS Climate Innovation Grant (CIG), he didn’t realize just how challenging it would be. The project was to launch an innovative carbon impact investment fund, but the team was unprepared for the sheer amount of agency requirements that accompanied the application. “The inclusion of [the Environmental Quality Incentives Program]… accounting of both direct and indirect costs, matching requirements, etc. were all very new to us,” Penrith admitted. At the time, there was no framework and accompanying benchmark and tools for innovative conservation efforts.  Submitting such a competitive application was particularly intimidating. “I’d pitched to venture capitalists before,” said Penrith, “so I knew how to put a pitch deck together. But putting together an impact program was a rather daunting thing…because there were really no tools out there.”

Penrith wasn’t alone. In his role as a climate finance consultant, some of the most frequent questions he hears are pleas for guidance on designing an effective conservation finance project, or on evaluating a potential investment in such a project. If you are an investor, how do you look at two similar conservation projects and evaluate which is likelier to succeed? How do you measure success, both financially and in terms of on-the-ground conservation impact? If you are a project developer, how do you design a project for optimal impact?

Daniel Pike, Principal at Gordian, uses this analogy: “In mortgage lending, there’s this concept of the 5 Cs: character, capital, collateral, and so on.” A lender knows exactly what information will tell them that a borrower is creditworthy, and the borrower knows exactly what the lender is looking for. “It would just be amazing if whenever people are in the [conservation finance] context looking at the quality of a project, they could have a kind of checklist.” What if we had, as Penrith puts it, “a FICO score for conservation projects”?

The Conservation Finance Network (CFN) together with Gordian Knot Strategies (GKS) released a report this month that charts a path toward such metrics. (The Network is a partner in producing this eponymous website.) “Enduring Arches: Building Conservation Finance Projects for Impact,” by Penrith and Pike, proposes an “Arch Framework” that aims to boost the efficiency and the appeal of private conservation impact investing at a time when both are critical to meeting the world’s most urgent environmental challenges.

Private institutional capital continues to be a crucial resource required to meetglobal funding needs for biodiversity conservation. A framework for evaluating early projects and their likelihood of success can go a long way toward establishing a common language for funders and project developers so both groups can negotiate from the same terms. Penrith explains: “Mainstream capital will not come into this market unless there is some common vernacular” that can translate project elements into success metrics.

Second, while innovation is inherently different than conventional grantmaking, a common framework can help keep funders engaged by increasing the likelihood they will see their desired outcomes. Penrith explains: “We’ve come across funders who are 100% gung-ho behind the mission of climate impact. They put dollars behind it and teams, but they haven’t necessarily seen the conservation impact on the ground or the returns that they expect. To me, that’s a wasted opportunity. Those are precious dollars, and we don’t want philanthropists to lose interest in [conservation finance] because they feel the results are varied, or lackluster, or not quantifiable. We need to keep their engagement.”

The authors also say the framework can help to improve the efficiency of capital deployment. Failure is expected and inevitable when investing in innovative conservation finance approaches, which is more closely comparable to venture capital than it is to conventional grantmaking. Important lessons often come from so-called failures, and funders should not expect a 100% success rate from these projects. However, scarcity of funding means opportunity costs are high when funders choose which early-stage projects to support. Without insight on effective project structures, capital may be more likely to flow to a project that does not yield useful results—while more productive schemes go wanting. “There’s so much noise in the space,” says Penrith. “and the result is that the conservation resources we all need are very tight.” By identifying key elements of success in early projects, investors and proposers can set terms more efficiently for projects that have the highest chance of delivering on their impact goals.

The framework grew from examination of past successes. Commissioned by the Walton Family Foundation, orchestrated by CFN, and undertaken by GKS, the assessment relied on a largely qualitative analysis of 25 CIG awardees from 2015-2017 with a diverse range of project domains and structures. At first, the project team aimed to look at past CIG awardees and assess how they had fared – both in terms of real conservation outcomes and long-term viability.

“We had no preconceived notion as to what we would find when we looked at these projects,” Penrith explains. “They seemed so sectorally different, and their models were different. But then, as we interviewed each of the folks, slowly the framework emerged."

The Arch Framework aims to help users intuitively visualize different components of projects in terms of their relative importance to success. Borrowing terms from classical architecture, critical project elements are divided into four categories: Springers, Voussoirs, Keystone, and Bricks. The four components come together to form an enduring arch that supports a well-conceived project. 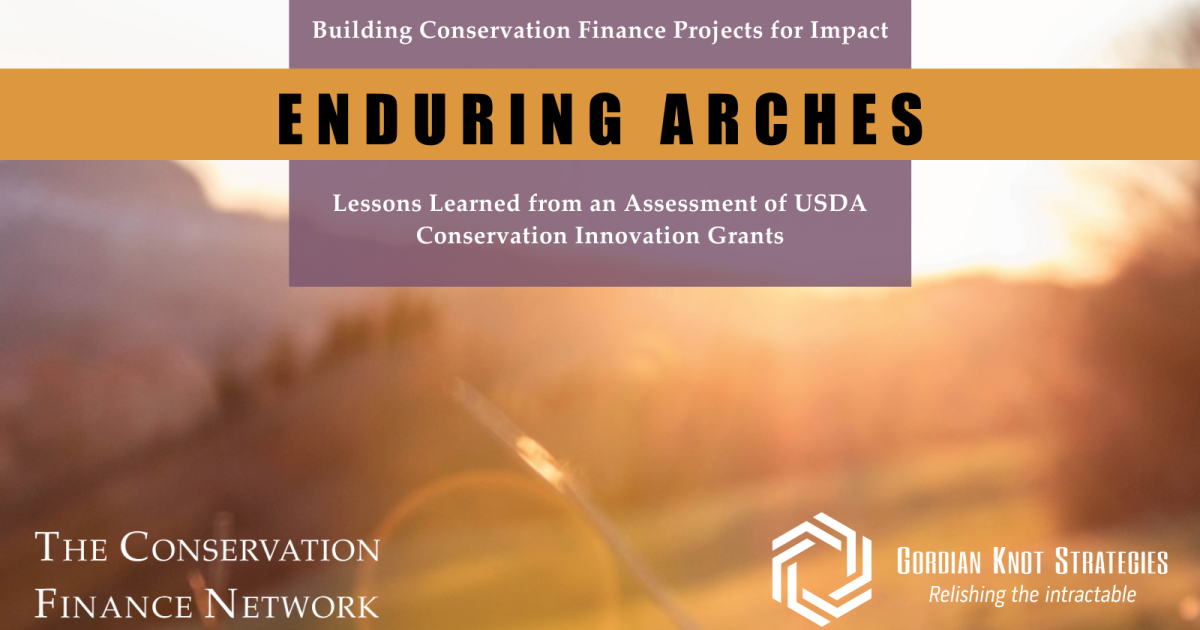 The project team spent a long time arriving at the “arch” concept for the framework. “We wanted something that was memorable,” Pike says, and they were looking for visual designs that conveyed a sense of stability and endurance. One of their early concepts used a honeycomb structure. Pike remembers that what really sold him on the arch concept was the idea of a hierarchy among the different project design elements. “Within the set of things that we felt were important, they’re not all equal. We really did feel like the ‘problem’ and the ‘payers’ were, well, foundational. And the thing that holds everything together is the ‘partners.’”

Penrith chuckles, remembering showing a draft of the report to a colleague who said, “I love it because the arch allows deal flow through the space in the center.”

The Enduring Arches report supplements analysis with explanatory real-world case studies sourced from the CIG awardees that they evaluated. One involves GreenPrint Partners, a stormwater management project in Peoria, Illinois, as an exemplar of ‘Springer 1) Significant problem or market need.’ Leigh Whelpton, Program Director at the Network (and a member of this publication’s editorial team) commented that solution-driven approaches in the CIG analysis were less effective than problem-oriented ones.

GreenPrint’s project focused on an immediate pain point: one city’s aging sewer infrastructure and unmanageable runoff from impervious surfaces. “Once they tightly scoped and implemented the work in Peoria,” says Whelpton, “they had a solid model for problem solving, tied to civic and stakeholder engagement, that could extend to other cities.”

Who exactly is the Arch Framework for? Penrith explains that it can help anyone interested in building or supporting a climate or conservation impact project: “I see [the Arch Framework] as much broader than just CIG applicants. We see it in the work that Daniel [Pike] and I do. We have a varied group of clients, and ever since landing on the framework we’re finding that the framework is applicable, even when these people don’t even know what CIG is.”

In particular, the Arch Framework is useful for innovative projects at an early design stage, according to Penrith. “You’re about to create something, it’s new, and you need to ensure you have the optimal chance for success…We ran into so many projects that were so focused on the impact that when it came to actually raising the capital they admitted to us, ‘we just didn’t think about how to raise money, we are out of our depth.’ That could have been taken care of right at the get go during their project design phase.”

Pike elaborates: “There’s a fairly high probability of failure when you’re working in innovative conservation projects.” In fact, only a minority of the CIG projects in Gordian’s analysis ended up both achieving conservation outcomes and advancing to anew stage of market development. The goal, says Pike, is to flip that around. “We want more projects to achieve their conservation goals and advance to the next phase.”

To get there, the team envisions a sort of “concierge service” or even a startup accelerator that assists projects in adopting the Arch Framework and building projects with a high likelihood of success. Funders like the NRCS could adopt the framework to evaluate projects in the future. Says Penrith, “if this could be adopted as a ‘FICO score’ for the conservation impact investing space? Fantastic, we hit a home run.”